Vacareşti – Solitude in the Crowds

I first learned about this hidden bit of wilderness right within the capitol of Romania over summer.  At that time, I was freshly-arrived from a rural town of 1,400 people to this city of 2 million, so I was more than interested in exploring something like the countryside.

Vacareşti, I soon learned, has a very interesting history, and one that still has a lot of mystery for me.

In the 1980s, when Romania was communist, this whole area was cleared out in one of Ceausescu’s grand dreams of recreating Bucharest as the “Paris of the east.”  He envisioned a lake for water competitions, a sports arena with 12,000 seats, multiple football stadiums and tennis courts, basically a whole neighborhood turned into a giant sporting complex.  Construction obviously meant radical changes for the neighborhood, resulting in the demolition of homes, a beautiful monastery, farmland, and anything else in the way.

Well, everything was destroyed, but nothing was ever really constructed.  So the land sat vacant for quite some time.  Of course, in a city the size of Bucureşti, it didn’t take long for that vacant land to become the new home for squatters, most of them Rromi.  Ramshackle homes sprouted up, built of what others had discarded as worthless.  And that’s how things stayed until some time in 2003.

At that time, an Australian man (who, incidentally, is a friend of a man who has been coming to our home church meetings) purchased a forty-nine-year lease on the land, looking to build a casino, race track, and all sorts of other exciting things.  He was looking to get rich and had big plans.

But, from what I’ve heard, one day it suddenly dawned on Bucureşti’s “powers that be” that this Australian man was looking to rake in a big old pile of cash without them.  So they decided they needed a bigger share of the profits and began to block his building operation by throwing all sorts of bureaucratic obstacles in his way.  The other side of the story is that the city realized the place had become home to all sorts of protected species of birds, and so simply destroying it would be inhumane.  I don’t have any definite knowledge either way, but you be the judge.

Anyhow, my friend tells me it’s looking more and more like Vacareşti will remain empty for quite some time, if not indefinitely.  Although I feel for the man leasing the property and the predicament he’s in, I can’t pretend to be upset that this bit of “wilderness” within the capital is likely to remain unchanged for some time. 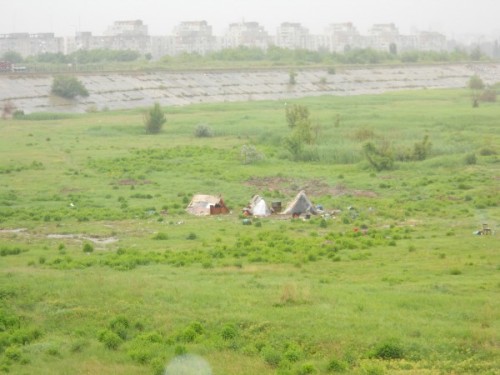 This entry was posted in Bucharest and tagged bucharest, history, solitude, vacaresti, wilderness. Bookmark the permalink.

One response to “Vacareşti – Solitude in the Crowds”