We were invited back to Bărbuleşti yesterday to speak at the second church in the town.  When we arrived, our host informed us of an interesting turn of events since our last visit.

On Saturday, an older Christian man had passed away.  As he died, he looked towards his son and told him, “I see a fire covering the whole earth.  Repent before it’s too late.”  And then he died.

Naturally, that caused quite a stir.  Our host encouraged us, “Preach repentance.  Preach against sin.  God is touching many people now.  They are very open, but they have many sins.”  That was good news because that’s the message God had put on my heart anyhow.

Well, we preached to a crowd of about 300 or so, and I think we mostly made sense and spoke with power.  (I’m still not used to this whole translator thing, and I think I’ve gotten worse now that I know some Romanian.  I find myself getting distracted by listening to the translation.)  Anyhow, the crowd seemed at least somewhat receptive, but we’ll see what happens long-term.  It’s easy to feel your need for God right after a loved one dies.  Time will tell whether what we spoke left a lasting impact or not.

After the meeting, the family invited us to their home for the mormânt.  It’s a Romanian word meaning “grave,” but our host used it to describe the gathering of relatives at the deceased man’s home.  (Considering his body was still there and would remain so for 3 more days, I guess the term “grave” could apply, at least for a while.)  Outside the home, about 500 people (family members, neighbors, visiting missionaries from the U.S.) had gathered, some in plastic chairs, some on benches, some standing in the roadside.  In the yard, energy drinks, “cowboy” coffee, and “juice” (suc in Romanian means both soda and fruit juice) were passed around with delicious barbecued pork while various Christians in the community shared bold and abrasive (at least by U.S. standards) messages of repentance.  In the meantime, family members would occasionally close their eyes and shriek at the top of their lungs on behalf of the departed man.  If I hadn’t been warned ahead of time, this wailing would certainly have made my hair stand up in fright.

Pray for the town of Bărbuleşti.  There are two good churches here, and the people are more open now than ever before.  Pray for the Holy Spirit to be present to convict of sin, righteousness, and judgment (John 16:8), and that the Father would draw many to Jesus (John 6:44).  Ask for God to give wisdom and strength to the Christians, that they would be good witnesses in this time, with their words and with their deeds.  And, of course, pray for the family to be comforted so that what the enemy would love to use for evil would instead be used for good (Romans 8:28). 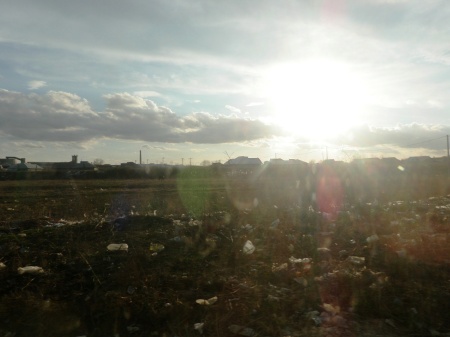 One response to “A Gypsy Funeral”